John Walus honored as “Macomb County Veteran of the Year”

John Walus honored as “Macomb County Veteran of the Year”

Honoring service to the community

John Walus with his wife, Debbie, on Monday minutes after being named the Macomb County Pat Daniels Veteran of the Year. PHOTOS BY JAMESON COOK—THE MACOMB DAILY

John Walus, who was instrumental in starting the district court Veterans Treatment Court in Macomb County, has been named the county’s fourth Pat Daniels Veteran of the Year.

Walus, a retired Lieutenant Colonel in the Army, was honored at a ceremony Monday during a committee meeting of the county Board of Commissioners in the county Administration Building in Mount Clemens. The board passed a proclamation awarding him.

The proclamation says Walus “has been essential to the success of graduates since the program’s inception.”

Walus “unselfishly gives his time, energy and undaunted efforts to Macomb County’s large and growing community of veterans in need,” it says. “As a veteran himself, LTC John E. Walus serves his community each and every day as a compassionate and empathetic advocate for our county’s veterans.”

Walus not only helped form the court 10 years ago, but has been director of its mentorship program and is a lawyer who assists veterans in obtaining benefits. He also is president of the Friends of the Macomb County Veterans Treatment Court, which is the nonprofit organization for both the 41B District Court and Macomb Circuit Court veterans treatment courts that provides financial support.

Walus said he was “quite surprised and humbled” when he learned from circuit Judge Tracey Yokich, who is involved with the circuit VTC, informed him he would be receiving the award.“You don’t do this for the recognition,” he said. “It’s a very rewarding experience.”

His wife, Debbie, praised her husband, whom she met at Wayne State University.

“He’s my husband of 50 years, and let me tell you what, this man takes care of the vets,” she said. “The civilian team and all that is right there supporting him. But this guy here is right there to make sure vets are taken care of.”

Attorney Lori Smith, who is treasurer of the Friends organization and is current president of the Macomb County Bar Association, called Walus “amazing.”

“I adore the man,” Smith said. “It has been an honor to know him and be able to work with him.”

Mentors “listen to the concerns and problems of the participants and assist them in finding solutions,” says the Friends of VTC website. “Mentors provide feedback, highlight veteran participant successes and a good dose of straight talk when failures occur.” 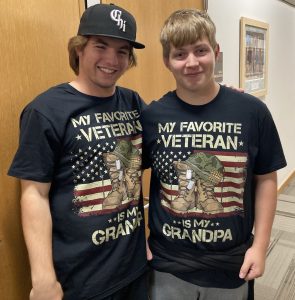 Two of Walus’ grandchildren, John, left, and Maxx, attended the ceremony Monday for their grandfather being named the Macomb County Pat Daniels Veteran of the Year.

“A mentor can speak to a veteran like only a veteran can,” Walus said. “In military terms, you can ‘chew his ass’ and he can take it because he’s a veteran. It’s proven to be a winner.”

The program allows veterans charged with non-violent criminal charges to serve intensified probation with treatment and support to cater to their specific needs, in lieu of potential jail or prison.

The 41B VTC currently has 18 participants and has graduated 165 veterans among the more than 185 participants.

Walus in 2011 initiated the idea to create the district court VTC, visiting 41B Judge Carrie Fuca, who enthusiastically agreed to it.

Walus said he had read an article about a VTC in Grand Rapids and contacted someone from that court there and visited a VTC in East Lansing. He also visited the first VTC in the country in Buffalo, N.Y. And, coincidentally, when he went salmon fishing with veterans in Manistee, one of his boat mates was a veteran who started the VTC in Novi.

Unbeknownst to him, after he and Fuca began working on the creating the court, they learned then-judge Mark Switalski of Macomb Circuit Court was forming a VTC there.

The two courts both started in April 2012.

The Friends group provides a variety of support to pick up expenses that the VTC’s grant funding does pay for, such as to help veterans with rent or other expenses,

Walus began his military service in 1972 when he volunteered for a two-year enlistment in the Army during the Vietnam War. He decided to make it a career, going to officer school and serving in many positions, ending in 1994.

He had many career achievements and received many awards and decorations during his Army service. For details of his military record, visit https://bit.ly/3hM9znV.

He worked in private industry for 10 years, during which he attended law school and became a lawyer in 2004.

Walus’s grandfather, John, and father, Eugene, both served in the military. His grandfather came to the United States from Poland, and he gained citizenship due to his service during World War I, Walus said.

Prior recipients of the county Veteran of the Year award include Pazzella Colston Bonner of Center Line in 2021, Phil Randazzo of Shelby Township in 2020 and Daniels in 2019.

John E. Walus retired from the U.S. Army after twenty-two years of active duty service as a Lieutenant Colonel. The areas of law that he intends on practicing are Veterans Law, Probate and Estate Planning, Wills and Trusts, Guardianship and Conservatorship, and a General Practice.
Page load link
Go to Top