Dealing with Stolen Valor When You Encounter It

Dealing with Stolen Valor When You Encounter It 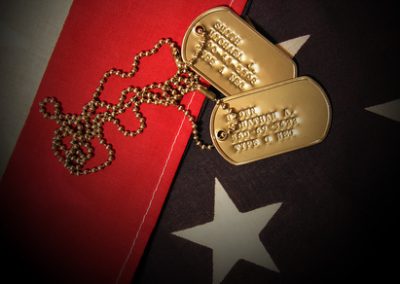 According to The Stolen Valor Act of 2012, it is a punishable offense if someone tries to use the military citations and rewards for their own personal gain if they haven’t earned them. In America, a lot of people consider stolen valor as a viable option to get themselves some favors done. Thus, if you ever encounter a person in a military uniform with all the badges decorated on his chest and you feel confused about the authenticity of that person, then it’s best to converse with such a person.

Talking to such people, who are trying to pull off a military impression to get a free coffee in the honor of their rendered service, needs some skills and caution. You need to keep yourself calm and composed and ask them a couple of questions to figure out if the person in uniform has actually served in the military or just faking it. If they’re faking it, they’ll be caught off guard. Here’s what you need to do when you encounter stolen valor.

1- Make Sure You Document Everything

The best thing to do in a situation where you encounter stolen valor is to film your entire conversation with such people. If you manage to get them on the camera and they are really using stolen valor for their personal advantage, then they can be reported to the police easily because this is illegal and you’ll have evidence to prove it. How you prefer to record your encounter is up to you. You can do it secretly or you can hold your cell-phone camera right in their faces.

2- Staying Calm Is the Key

There are so many online videos that we’ve seen where a veteran soldier confronts someone for trying to be something they’re not. All these videos are the same. There’s a lot of yelling with a cell-phone camera zooming in on the faces of these pervert people and the rewards that they’ve given to themselves. But the thing that needs to be in your mind always is that you’re not the person who needs to go under scrutiny, it’s the faker who should be judged. Thus, if you want to build a better case against the people who’re using stolen valor to their benefit, then you should maintain a calm demeanor while you tease out the true identity of a corrupt person pretending to be a military officer.

3- Ask as Many Questions as You Can

Try to put up as many questions as you can. But you need to remember that these real military veterans tend to forget a lot of details, so be careful, you don’t want to accuse an honest veteran of stolen valor. Try asking tricky questions. What unit did you serve in? What is that badge called? You can also praise an aspect of their service that doesn’t even exist, and if they latch on to it with the hopes of getting your approval, then you have unveiled a fraud. For instance, you can ask how long it took you to be promoted to (a rank that does not show on his uniform).

Stolen valor is a serious issue for veterans and as well as for those military men and women who are actively serving in the military. Thus, for a person who encounters stolen valor, it is really important to either call such fraud people out or report them to the authorities. You can contact Walus Law Group if you need the assistance of a veteran rights attorney in the Detroit area in the cases pertaining to stolen valor. Feel free to give us a call at 586-954-3250