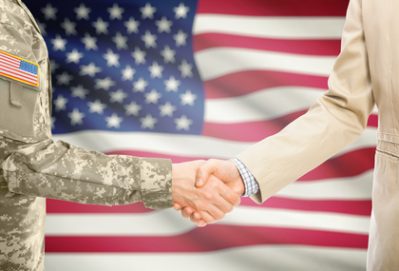 The veteran ID card has rolled out, and one thing that veterans are noticing is the Office Depot logo on the back of the card. Office Depot has partnered with the VA to bring the veteran ID card to life. This card acts as proof of service for discounts at private businesses. In the past, veterans had to carry their DD-214 discharge papers, which contain personal information like their social security number.

In 2015, Congress ordered the VA to provide free ID cards to veterans to eliminate having to carry their DD-214 papers. Funding for the cards was not approved by lawmakers, leaving the VA without the funds to produce or ship the cards. Office Depot stepped up and partnered with the VA to provide the new cards through September 2020.

A Word About the Discounts

While the card has the Office Depot logo, at this time there is no veteran discount directly associated with Office Depot. Instead, Office Depot is offering a 20 percent discount to members of the private company, Veterans Advantage. Veterans Advantage is a private company that offers a low-cost veteran rewards program that provides access to military discounts that are generally not advertised by retailers. Plans for these programs are as low as $4.99/month and would provide access to that 20 percent discount for Office Depot, along with other businesses.

“Office Depot recognizes the sacrifices that our veterans have made, and its logo represents the company’s support, as well as its partnership in print production and delivery of the ID cards,” Curtis Cashour a VA spokesperson said in a statement. He added that “Office Depot will cover the cost of printing and mailing the Veteran ID cards until September 2020.”

That being said, the new veterans ID card makes it easier than ever to receive military discounts from private businesses without carrying private documents. There are other veterans ID cards available, but often as a packaged deal which must be paid for. Partnership with Office Depot has helped provide these free cards despite the lack of funding from lawmakers.

What to Look For on Your Card

The card itself features a photo of the veteran, the veteran’s name and identification number, and two official seals. The card is also clearly marked that, “This card serves as proof of service in the Uniformed Services of the United States and does not reflect entitlement to any benefits administered by the Department of Veterans Affairs.” The back of the card has the Office Depot logo, as well as shares information about the Veterans Crisis line.

The Veterans Crisis line provides support for veterans and their families, who may be experiencing an emotional crisis. The information on the card offers the phone number, website, as well as texting information for veterans or their families who need to speak with someone immediately. The new ID card not only provides a free option to identify veterans without needing to carry personal paperwork but also provides valuable information in case of a crisis.

Thriving Despite a Troubled Start

Veterans who have not applied for their free VA ID card can do so online at the VA website. They can also download and print a version of the card directly from the VA’s website. Overall, the VA ID cards seem like a great resource for veterans that was made possible through the support and partnership of Office Depot.

If you have any questions or would like more information about the VA Identification Cards, give us at Walus Law Group a call.  We can be reached at 586-954-3250.